Here's the news on the fall sports season. 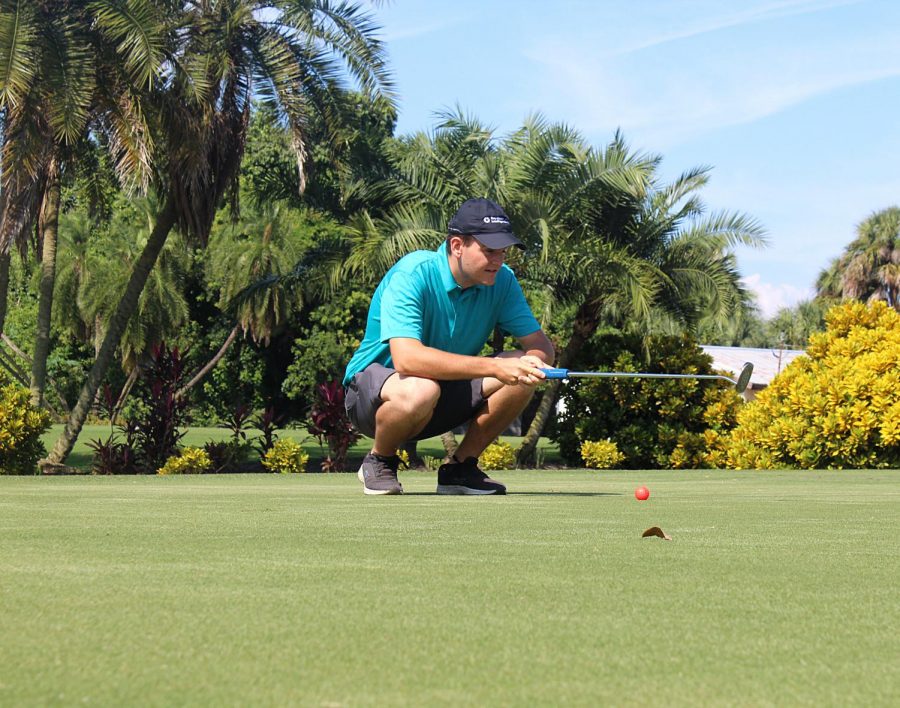 Junior Andrew Riiska squats down to make sure that his golf ball is on track. Golfing has always been one of Riiska’s favorite things to do. “I like golfing ... and putting is what I love to do the most when golfing,” Riiska said.

This year’s golf season was a challenging one, as the team faced the coronavirus and ended with a record of 1-5. “The 2020-2021 season was short, and players had to be a lot more distanced. They chose to have online score cards this year to restrict contact,” golf coach John Toronski said. These changes helped to keep the players and coaches safe. “Golf is one of the few sports that was almost made for social distancing,” Toronski said. Though the season was short, the team made sure to make the best of the opportunities they had. Toronski said there were bright spots, including junior Andrew Riiska, who continued to play consistently well. “A highlight was being able to play during this whole pandemic, and that we got to have a season this year,” Riiska said. “But we didn’t get to play as much as last year and we had a shorter season.” Two other standouts were sophomores Michael Tunnell and Kyle Fillhart, who Toronski believes will be the future of their program. “Michael and Kyle are sophomores who played last year and have shown a lot of potential and growth. They will continue to be the core of the golf team over the next couple of seasons,” he said. Up-and-comer Tunnell said he looks forward to next year’s season. “I think that the future of the golf team will depend on the skill of the new people next year, because we had no new people this year,” he said.
– SNN Staff Writers TAVEON WHEELER and MATIAS DICRISTO

Cross country coach Anthony Snead has led a winning cross-country team for years, representing Lakewood at a high level. Much of that success this year can be attributed to their leader on the field and standout athlete, Preston Gruber. “Gruber is a senior who is only seeking greatness,” Snead said. “He has the goal to try to make it to the state championship; he’s trying to go by any means necessary. He’s working hard, he’s encouraging his teammates and going above and beyond expectations.” In addition to Gruber, Snead singled out up-and-coming two-sport athlete Jordan McIntosh. Snead said she is a runner who never complains and does everything she’s told. “She grabs her toughness and runs with it,” he said. “Cross-Country is a sport that some of the best athletes refuse to attempt, but (Gruber and McIntosh) are dedicated to the sport and are trying to be great in the sport, and they both have been productive.” The team ended the season placing third at the district championships. “I was happy that we had a great season and we had some great additions to the team,” Snead said.
– SNN Staff Writer TAVEON WHEELER

Because of COVID-19, this year’s volleyball season was tough and abbreviated. “We all are disappointed about this season. … We only had seven games out of 24. I feel bad for the young girls who played great, but we did not win any games this year,” Coach Necole Tunsil said. Still, there were highlights, including the team’s up-and-coming player this season, sophomore Julie Salverio. Salverio said she enjoys playing volleyball and has a huge passion for the game even though she started playing only two years ago. She said her coaches are intense, “but it’s a good thing because they push us to be great.” Over the past season she said she has improved her serving and passing. “I finally got my overhand serving down. I struggled a lot with that last year,” Salverio said. The older players have taught her how to be a good teammate and show what it means to be a team player. “Volleyball is a game about communication and that’s a key that the older girls teach,” Salverio said. Despite the difficult season, the team improved greatly from their first game. “Our last game was great. We were working together more but our first game was horrible, it was very unorganized. I’m glad we got more help,” sophomore Joteisha Thomas said. “In volleyball practice, we had our good days and bad days, but we maintained it.” While the virus affected everyone, it wasn’t just a bad effect. “Surprisingly, COVID-19 made us have a stronger connection than last year,” Thomas said. “We had to communicate about what to do then just do it.”
– SNN Staff Writers JONATHAN WHELAN and SKYLAR HARRIS

The Lakewood High School swim team, always a solid team, was led this year by stand-out swimmer Michael Damel, coach Robin Althaus said. Damel, a junior, has been on the team since freshman year and has worked hard the last three years improving his speed and technique. Damel swims freestyle. His hard work paid off as this year he was able to shave off lots of time on his freestyle swim races. He has set personal bests for himself recently and is a great leader to the younger swimmers. “He is always willing to help a young swimmer and their techniques,” Althaus said. Swimmers who qualified for states this year are: Sarah Long, Maddie Kirsch, Aaliyah Ball, and alternate Hayley McCormack for the 200-meter relay; Audrey Long for the 50- and 100-meter freestyle; and diver Ayden Maitner. (For results of states, check the SNN website at pcsb.org/snn.)
– SNN Staff Writer JONATHAN WHELAN