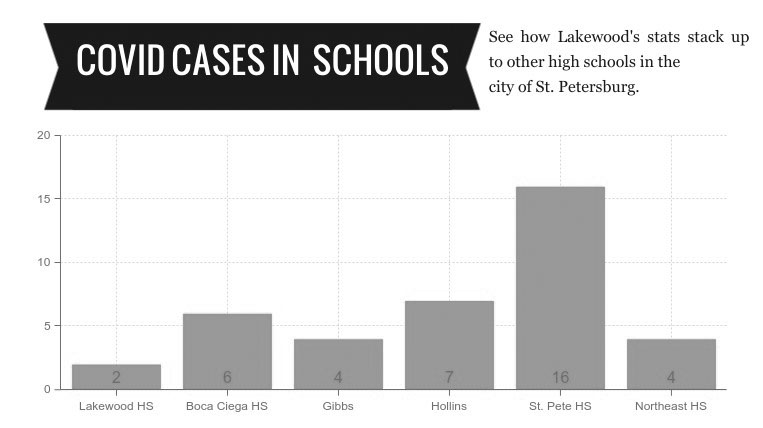 According to Pinellas school district numbers, Lakewood has had the fewest COVID-19 cases of all six high schools in St. Petersburg.

The Lakewood administration is doing just about everything it can to keep students and staff safe from getting the coronavirus. But even with the mandatory masks and social distancing, two people – one student and an intern have gotten infected.

One of the cases led to two teachers, one campus monitor and 42 other students being sent home while just one person was quarantined for the second case besides the intern according to principal Erin Savage.

“I knew us coming back would result in (this). The virus is very unpredictable, so it was only a matter of time,” school resource officer Julian Battiest said.

The first student got her positive test result on a Monday in mid-September and immediately called the school, but no action was taken until Friday of that week. Savage said she had to gather documentation, including seating charts for classrooms and the bus, to send to the Department of Health. Some paperwork had to be resubmitted because it was not completely accurate, but as soon as they received letters from the DOH everyone who had to be quarantined was notified.

“A few parents were angry (and) staff members were concerned,” Savage said

Junior Caitlin Agostine, the first COVID-19 case at Lakewood said she probably got it from her job at a grocery store because many of the other staff members wear their masks incorrectly.

Agostine’s entire first period yearbook class was sent home, including the teachers, because that was the class, she was sent home in due to a runny nose. She said she didn’t understand why in one of her classes, all the students had to go home, while in other classes only a few students were quarantined.

“I didn’t think they handled it very well,” Agostine said. “I thought that was weird, because more people should’ve been quarantined.”

Most students who had to go home and be quarantined understood why they had to do online school for two weeks, but some were upset because they were in sports and wouldn’t be able to participate during that time.

“It was weird and made me mad not being able to play in the first game of this year for baseball and missing a few practices,” said sophomore Jonnie Whelan, a pitcher-first baseman for the Lakewood fall baseball team.

Agostine said she was surprised she tested positive because she was only suffering from mild symptoms, including a runny nose and headaches. While she was home, she did online school and was quarantined in her bedroom, away from her family until she got her negative test result. She said her family brought her food and drinks and when she went to the bathroom, she had to wear two masks and not touch anything.

Agostine’s two journalism teacher, Kathleen Tobin and Jade Shiver, also were quarantined but continued teaching from home so students did not miss any learning.

“It was kind of an incredulous feeling; I didn’t really feel like it was happening,” Shiver said.

The intern tested positive Oct.14 and was immediately quarantined, she’s been back since the 27th. No one else was quarantined because she stayed eight feet away from her students by staying in her teacher bubble in the front of the classroom according to Savage.

Savage said it was recommended at the beginning of the year that all teachers always stay at least 6 feet away from their students at all times by not walking around and staying at their socially distanced desks, but in classes like art and photojournalism teachers need to move around to help their students .

Savage is happy that there’s only been two cases because other schools in Pinellas County have had double the amount of cases Lakewood has had in their first week of school.

“I am very surprised that we’ve had so few cases,” she said. “I think the numbers will grow a little, I’m hoping not a whole lot though.

170 students have returned from online school and if anymore wants to come back they are guaranteed acceptance. Most classrooms have to adjust, resulting in desks being closer together which is high risk.

“Hopefully parents and families are monitoring the daily activities of their children outside of school as well as their health before sending them to school so that they are not unknowingly or accidentally putting others in danger,” Savage said.

One online student who’s also a basketball player had to miss her practices because her father tested positive but came back after a two-week quarantine because both their tests were confirmed negative.

Students and staff aren’t required to get tested if they’re quarantined but if they’re feeling sick it’s best to stay home for 10-14 days and decide if they want to get tested based on whether they still feel sick or not.

“We as people just have to be cautious and be mindful of clean habits,” student resource officer Eduardo Rivera said.