Rachel Fawaz said she moved to Pasco County to be closer to relatives who care for her child. 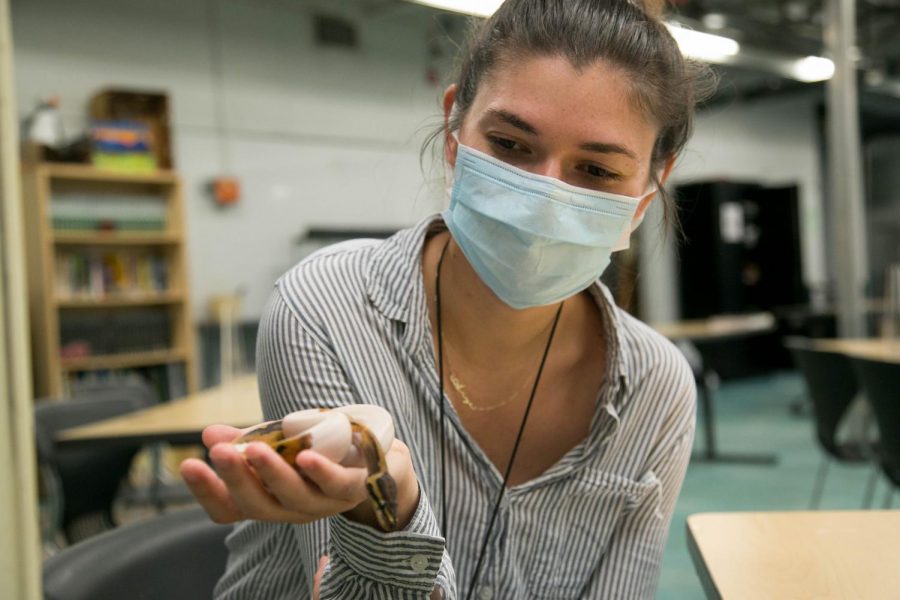 Former AMSET lead teacher Rachel Fawaz, seen here holding a snake, left Lakewood after the first semester to be closer to her family in Pasco County. “I’m actually extremely sad about her leaving. She was kind of like my second mother figure,” junior Sharee Young said.

Staff and students were left in disbelief upon hearing that AMSET teacher Rachel Fawaz left Lakewood High School in January after teaching for four and a half years. “I was surprised. We had just got her certified and in less than a month she was like, ‘Hey, I’m leaving,’” AMSET assistant principal Tequena Akintonde said. AMSET, which stands for Aquatic Management and Environmental Technology, is a Lakewood program that teaches students about aquaculture. AMSET students said they were also surprised at Fawaz’ departure.
“She just said she was moving, and we were all shocked; we weren’t expecting it,” junior Dominic Forlizzo said. Fawaz said she left because she has a young baby that her family in Pasco County helps takes care of, and the drive from her home to Lakewood was an hourlong. She moved weeks prior to the end of the semester but commuted to Lakewood to finish out the semester. “I really did not want to go. I absolutely loved working there. If it wasn’t so expensive (gas/wear and tear on my car, etc.), I would’ve stayed,” Fawaz said in an email. Although Fawaz said she misses teaching at Lakewood, she enjoys her new job at Maniscalco Middle School in Lutz, where she teaches sixth through eighth grade Intro to Agriscience and Agriculture Systems. Finding a replacement for Fawaz wasn’t easy, but Akintonde made it happen. She said they interviewed candidates in mid-January and submitted the names to the school district. The new AMSET teacher, Sierra Raines, started Feb. 2. (See story at right.) One of the biggest challenges when trying to fill the spot was trying to find someone who was qualified. “We needed someone certified in agriculture or biology and finding someone who has both of those qualifications is a little difficult,” Akintonde said. “With AMSET one of the things we wanted to do is grow, and it’s hard to grow a program when you have to introduce someone new to a program. It’s also difficult trying to find the best teachers when you’re in the middle of the year, because all the great outstanding teachers may have been hired already.” Junior Sharee Young said AMSET was greatly affected by Fawaz’ departure. “I’m actually extremely sad about her leaving. She was kind of like my second mother figure, and she always helped me in any way she could. I started crying when she texted me and told me where she was going and what was going on. I was happy for her, but I still cried,” Young said. In the end, students said they are warming up to the new teacher but are still sad about Fawaz leaving. “I like Ms. Raines a lot. She’s really nice and very understanding, but no one comes close to (Ms. Fawaz),” Young said.