They are part of a team that went undefeated in the regular season since 2018. 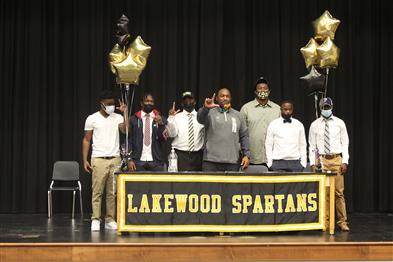 Five Lakewood High School football players signed Wednesday (2/3) to play at the collegiate level. After another undefeated season, this 2021 class has much to be proud of, head coach Cory Moore said.

“This class is special because they haven’t lost a regular season game since 2018,” he said. “It’s always a great thing to get a kid into college.”

Receiving college scholarships are Artez Hooker, Cortez McKenzie, Derrveron and Derreyon Maxwell-Black and Davion Cummings. They took in the moment at National Signing Day on the Lakewood auditorium stage, which was decorated with black and gold balloons with the Spartan drumline playing in the background.

In addition, a sixth football player, Jalen Stubbs, is heading to the U.S. Navy.

McKenzie, an outside linebacker, said he was excited about his opportunity to play at the next level.

“Coach Moore had my back and never switched up,” he said.

Principal Erin Savage, who has known the boys for four years, said she was excited to see them sign.

“Seeing these guys grow and leave is incredible every year,” she said.