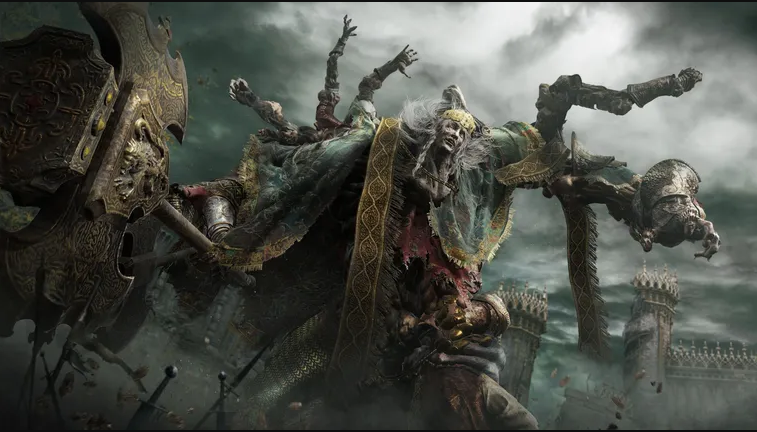 Elden Ring tells the story of a huge war that takes place in the Lands Between, a war that had no victor. It’s because of this, that total hostility reigns among its residents. It’s up to a nameless Tarnished to rise up from the aftermath of war and thrive to become the Elden Lord.

The release of Elden Ring brought in veteran and rookie Soulsbourne players and got everyone hooked. (“Soulsbourne” is a genre of games that have increased difficulty and punishes players’ mistakes in combat.) With my 24 hours of gameplay, let me tell you about what I received from this game… a whooping.

Being the first true open-world game by FromSoftware, the extensive Lands Between can take a person 107 hours to fully explore, so you’re never running out of things to do.

The difficulty of the game also increases the fun factor as it does not hesitate to punish players any way the game seems fit. A prime example of this is the Grafted Scion at the very beginning of the game. This first boss treats you like gum on its shoes. It’s only when you level yourself up with runes, the in-game currency, and experience points that you can start finding yourself a stepping stone. However, you can make yourself seem unstoppable force of power, just to meet a knight with a halberd (a renaissance weapon consisting of a spear and an axe) that’ll completely humble you.

There are around 100 different unique bosses that have their own playstyle, but they all have one thing in common: they have the fullest intent to kill and degrade you like garbage.

Despite having a fun time myself, I’m forced to adapt to the “difficult but fair” mindset, where no matter what happens to you, even if it feels like it shouldn’t have happened (like a pendulum blade striking you through two walls) you have to remind yourself that this game’s entire purpose is to make you rage.

Elden Ring also gives you the option to play online. Gamers can use a mechanic called “Fingers” which in Elden Ring is a way to enter worlds different from your own. You can use your fingers to come into another person’s game as a cooperator and help the host, or an invader to try and stop the host any way possible.

The Lands Between is alluring. The scenery takes my breath each time and each section of the lands is never the same. You start out on a dark isolated island, just to die a couple times and walk out to a beautiful cliffside view or a castle near space. Even the worst-looking places look super appealing. A prime example is Caelid, a lush forest that has been infected with Scarlet Rot, a fungal disease that consumes things from the inside and causes your body to decay, turning it into Childs Park, Florida. The orange desolate wasteland uses its sights on cliffs and hills to remind you of the land it once was.

Lovely. Each of the scores orchestrated by FromSoft for the Lands Between are absolute ear candy. Each boss has a unique orchestra behind it. The juxtaposition between Margit, the fell omen, and the Regal Ancestral Spirit is astonishing. It shows Yuka Kitamura, the composer of many FromSoftware games, knows how to direct your attention to something important.

But no game is always perfect. Elden Ring has its fair share of bugs and glitches. Earlier I mentioned that you can die from a pendulum blade two walls under you, which isn’t intentional at all but at the same time is.

The enemies’ hitbox and animations are coded so they are never staggered after hitting a wall or an object obstructing their attack range. But when you hit the tiniest rock that seemed to be in your way of striking, you’ll be knocked back and possibly killed because you couldn’t get that last swing off.

Players in the online variant of the game are already exploiting others for runes, so it kills the supposedly fun invading experience. So far, FromSoft hasn’t done anything to prevent this from becoming an issue so we’ll have to deal with it and as a community help each other when the problem appears.

Elden Ring is an amazing game that had a part in breaking the online game status quo. Usually online games are filled to the brim with micro transactions (See Call of Duty, any game from Ubisoft after The Division and Halo: Infinite). Despite the bugs and glitches, Elden Ring still has proven itself to be everyone’s Game of the Year when the year just started and worth the $60. Hopefully it paves the way for more online games to follow.