Freshman guard stands out among the crowd

Alahni Lovett averages more than 20 points a game and keeps her head focused on the goal. 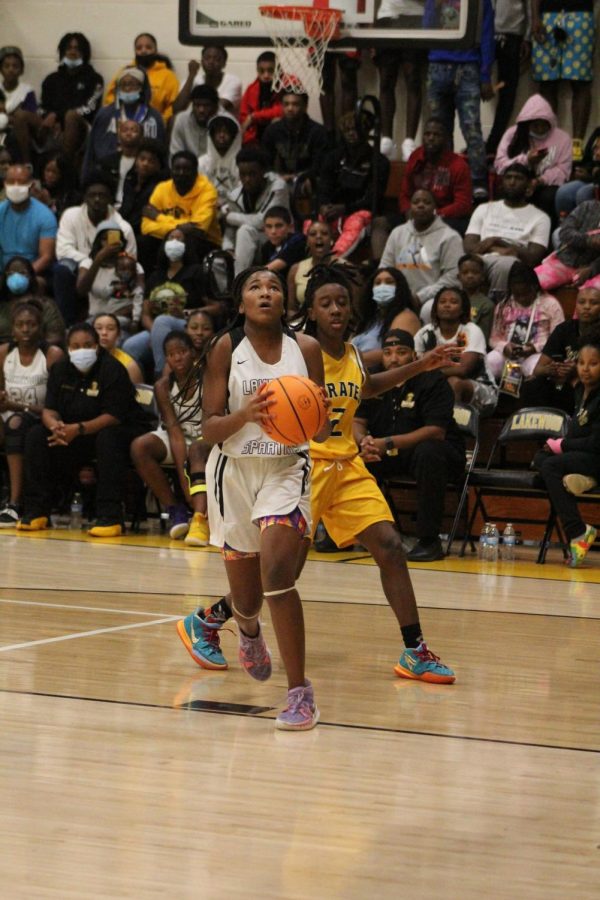 Freshman Alahni Lovett attempts a layup during a game against Boca Ciega high school on Jan. 6. Lovett is the top scorer on the girls basketball team.

Freshman Alahni Lovett has jumped on the scene playing like an all-star for the Lakewood girls basketball team.

Averaging more than 20 points per game, she’s the top scorer on the team and well on her way to score more than 500 points this year.

Lovett said she fell in love with basketball at a young age, inspired by her father.

“I’ve been playing since I was 4 years old, just over 10 years. When my dad bought me that ball I just fell in love and worked to get better from that day on,” Lovett said.

However, in sports, with a great performance on the court, attention is bound to follow, and Lovett tries to keep her head straight and focused on the goal.

“I look past it all and don’t too much worry about it, but I enjoy it. It’s fun just walking, minding your business, and somebody that you’ve never seen or talked to knows you,” Lovett said.

Head girls’ basketball coach Necole Tunsil speaks highly of Lovett and everything she brings to the table.

“She’s a natural scorer and you can tell it’s something she’s worked on her whole life because she isn’t one dimensional,” Tunsil said.

Being such a talented scorer, it can be rough getting your teammates involved on the court, but Lovett makes it easy.

“She’s not selfish at all on the court and makes it easy for her team to play with her when she’s out there and she’s very coachable,” Tunsil said.

Senior Reilly Webb said it’s nice to have someone aggressive on the team.

“She’s able to see the floor differently than others,” she said.

While Lovett is a great player, she’s an even better teammate, singing the praises of her peers on the court and how they impact her game.

“We love each. We hang out every day outside of sports. We ride together and have each other’s back and it shows on the court when we go out there and compete,” Lovett said.

Lovett has interest from North Carolina State University and is excited about reaching the next level of her game and improving her game.

“She’s coming along gradually just being a freshman. She needs to work on her defense but she’s going to be a problem for the next couple years,” Tunsil said.

“I’m excited to get to finish the season and get to the next chapter. I’m going to light it up,” Lovett said.