The four starting Spartans all earned Division 1 scholarships for football and a free education. 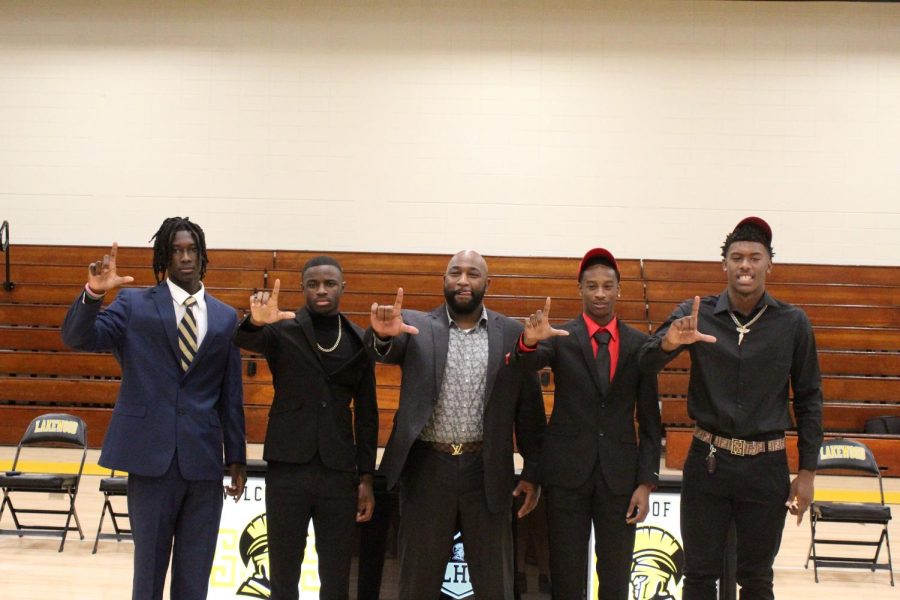 The Lakewood High School football team has always been filled with talent and athleticism, and four of their starting players just signed early to colleges, all Division 1, on Wednesday (12/15): Seniors Mike Evans to Austin Peay State University in Tennessee, Emmanuel McNeil-Warren to Toledo University in Ohio, Terrell Crosby to Iowa State University in Ames, and Amari Niblack to University of Alabama in Tuscaloosa.

“I am very proud of all of them. I feel like a proud papa,” head coach Cory Moore said.

The first one to get signed was Evans. Evans was a transfer from Gibbs High School at the defensive back position and immediately started. Evans averaged 6.3 tackles a game with six career total interceptions. Moore said that Evans was a great fit for the football team and Lakewood, and that he was a very smart player on the field.

Next signed was McNeil-Warren. This year as a senior he was injured for the first part of the season, during a game against Palmetto High. At the position of safety, McNeil-Warren, known as “E-man,” had 93 career tackles, averaged about four a game, stole a total of six passes from the offense and made two fumble recoveries. He was a three-year starter, and Moore called him a “ball hawk” as he saw the plays before they happened.

Next signed was defensive and offensive phenom Terrell Crosby. Crosby was all the hype as he came into the year committed to a small Division 2 college and ended up signing to Iowa State. On offense, Crosby had a total of 1,171 receiving yards, averaging 50 yards per game and 73 catches. He had 11 receiving touchdowns and 16 in total. On defense, he had 10 interceptions with 253 total yards. He had pick sixes on four of those interceptions. Crosby was a definite bright spot as he started as just a wide receiver, but after the season progressed, he developed into a safety and cornerback as well.

Last signed was Amari “Jurassic” Niblack at wide receiver. He had 1,178 total receiving yards, averaging 43 per game. He had 74 total catches, with 14 touchdowns. The name Jurassic is not a joke, as he is a monster at 6’5. He was able to take down defenses by not going to the ground. It would take the whole defense to bring him down, and sometimes he still got yards after nine players were on him. He was visited by Nick Saban, the head coach at Alabama last Friday.

“He is a hard worker and a great kid; his time has come,” receiving coach Michael Lindsey said about Jurassic.

The whole feel of the gym when they all signed to their colleges was upbeat, and it was easily noticed.

“Everyone looked supportive and happy for their peers,” freshman Xavier Terrell said.

All the other players were also in the gym supporting their teammates through their successes with them.

“It gave me a happy feeling, and it gives me hope that I can do it, too,” junior Camarri Alexander said.

Overall, the season for the Spartans was a success, ending in a loss to Cardinal-Gibbons in the state semi-finals. However, the season was a definite success as four of the seniors signed early, and there are more to sign in the future.

“My coaching staff and team are the best on the planet,” principal Erin Savage said.