The book Gender Queer is a memoir by Maia Kobabe about gender identity. 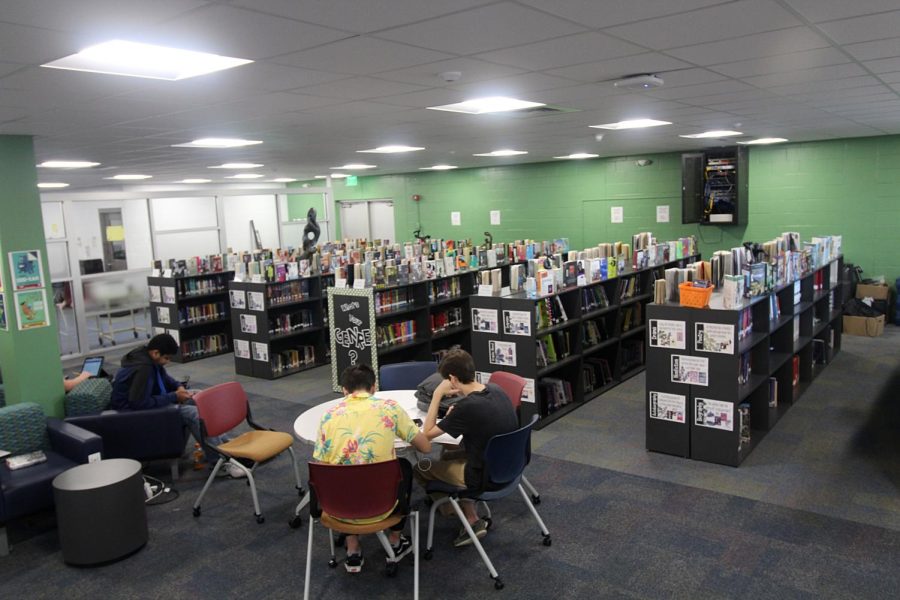 Students sit in the new library section in the media center on Oct 4, 2019.

This story has been updated.

Last week, Lakewood media specialist Heather Robinson said she was told by Pinellas library media supervisor Bronwyn McCarthy, who is in charge of all libraries in the district, that the book needed to be “weeded” due to its controversial nature. This means both the hard copy and e-book were deleted from the system, and cannot be checked out to students. The book was also removed from Dunedin High School, the only other school in the district that had it.

“(McCarthy) told me to pull the book from the shelf and weed it, which means to delete it from our inventory,” Robinson said.

McCarthy was asked for comment, but referred all questions to the district’s communication office. District spokeswoman Isabel Mascareñas said that “the book wasn’t banned, it was removed from circulation.” She explained that it was “taken out” of general circulation, but is still available to district staff in their student services collection.

“Due to the graphic illustrated sexual nature of some of the content, the book was deemed to not be age appropriate for all high school students,” Mascareñas said on Friday (11/19).

Published in May of 2019, the graphic memoir is a 2020 American Library Association Alex Award winner and a Stonewall Award Honoree. The School Library Journal dubbed it “a great resource for those who identify as nonbinary or asexual, as well as for those who know someone who identifies that way and wish to better understand.”

The story focuses on Kobabe’s journey as a genderqueer person, which refers to people who do not identify as solely male or female.

“I think that our district was trying to get ahead of the curve a little bit because there are other districts around the country who are challenging this book, as well as many other books that have to do with race and LGBTQ issues,” Robinson said.

The book has only recently come under scrutiny by parents, school districts and state leaders for its content, with many fearing that the book exposes high schoolers to pornographic images. The book has been banned from school libraries in Brevard and Orange counties.

“I definitely do think that there could be some things that are controversial. … There are some mature types of illustrations and mature themes, but I think that anybody in high school has probably seen or experienced some of those things (themselves),” Robinson said.

Normally, books called into question by a parent or someone affiliated with the high school must go through a review process done by the school to determine if the material is appropriate for students, Robinson said. That requires the person to read the book, answer questions about what was inappropriate, and then the media committee at the school reads the book and makes a decision. In this case however, according to Robinson, it appears this step was bypassed.

Robinson said that typically when a book is challenged, parents have to be reminded that the book is inappropriate not just for their child but all students in high school.

“Usually when a parent hears that, they’re like, oh, well I can’t really say that it’s inappropriate for every single student. I just don’t want my child to read it,”  she said.

According to Mascareñas, a parent of a student at Lakewood had concerns about the book.

“Therefore we looked into it,” she said.

From there, the district Teaching and Learning Services office reviewed the book and determined it was not age appropriate. In this case, Lakewood’s media committee was not consulted, Robinson said.

Originally published to help Kobabe explain personal obstacles to family, the graphic novel has been widely supported by students who feel that the memoir’s topic helps youth understand more about themselves and others.

“The banning of books like Gender Queer in the school environment prevents queer youth from seeing that positive representation and sends a clear message that the School Board deems LGBT folks inappropriate and not welcome on our school campus,” Lakewood junior Hayley McCormick said.

No other books in Lakewood’s library have been challenged or banned, but the library does have many books that have been banned elsewhere.

“I did (read the book myself). It was excellent. I loved it,” Robinson said. “It was a very heartwarming, lovely memoir of a person who spent many years trying to figure out who they were and eventually came to the conclusion that they were genderqueer.”

Robinson selected the book as an addition to the library and one she felt would help provide a guiding voice to those in the LGBTQ+ community at Lakewood and open the eyes of others.

“I am all about the freedom to read, and I selected the book on purpose because we have a population of LGBTQ students here at Lakewood who enjoy reading and as we know, books should be reflections of our community. They should also be windows we can look through and see what life on the other side is like. Books can build empathy, as well as show representation. (Removing the book) makes me very sad. … It has excellent reviews, it’s a Stonewall Award winner, and it’s a memoir. It’s a story of someone’s life, it’s not even a work of fiction,” Robinson said.

Gender Queer is currently available in the Pinellas County Public Library system in paperback, and available online as an E-book.