The storytellers behind the stories 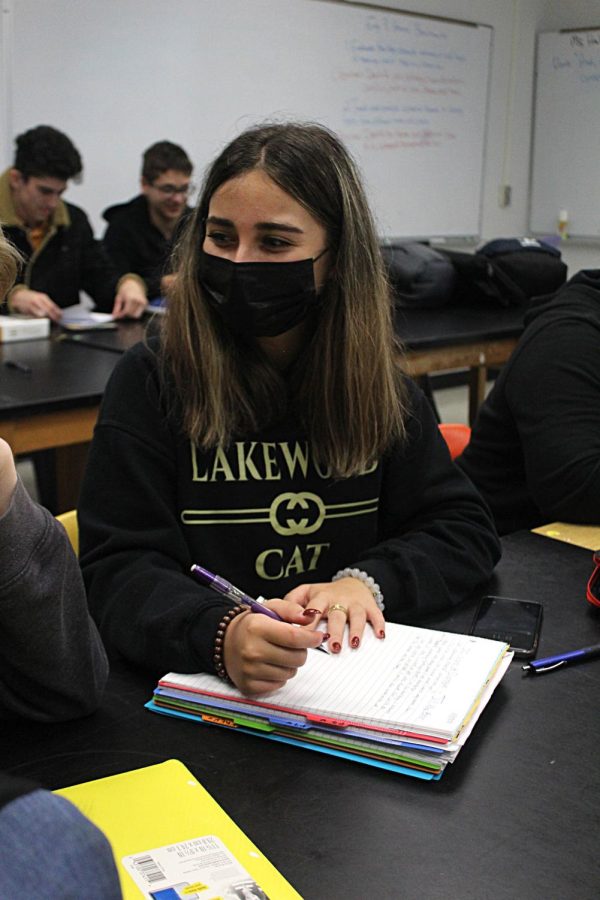 Creative writing. To many it’s childish, makes them think of stories they’d pick up from the library in elementary school. But for a lot of writers creative writing is freedom. It’s a type of storytelling with no bounds, full of mythical ideas and even more mythical worlds: fiction, fantasy, horror, anything the writer wants it to be. It doesn’t have to follow a script or lesson plan; creative writing gives storytellers the option to do nothing more than create.

And language arts teacher Elizabeth Halstead is giving bright writers at Lakewood High School a chance to do just that.

Her first period creative writing class of 27 is a class built like no other. When students enter her room, they are given 10 minutes to choose from a list of four prompts (or create their own) and let their imagination run rampant. From there on, the class usually focuses on a writing concept to work into their pieces – even this isn’t forced – before given the liberty to truly just sit down and create. An easy-A for those who aren’t the most enthusiastic and a safe space for those who are. A lack of structure that leads to an influx of ideas. It’s that simple.

“Even if they don’t want to be there, they try,” Halstead said.

Halstead loves teaching the big class. As a storyteller she gets to work with the students, watching their skill grow and reading their works – she said it’s her favorite aspect. When she started teaching at Lakewood in 2012, Halstead partnered with American Stage to give her students the opportunity to show off their stories. Two years ago, three of Lakewood’s written plays, made entirely by the students, got featured in one of American Stage’s local galleries. (All projects together are currently on hold due to COVID-19.)

This year, now without the trials and tribulations of online and in-person collaborative classes, Halstead has been able to work more closely with her students. This year has also given her the opportunity to find some star students amid them all, some who deserve recognition.

Freshman Viqahri Thomas is a young author who started writing only this school year. So far, he has written about five stories and is currently working on a longer project in the class. Action-based and “like (an) anime,” Thomas said this multi-page work follows a kid with superpowers going on adventures like no other. Thomas finds the freedom of this class his favorite part and loves using the class time to work on his longer stories and shorter ones alike.

While he doesn’t see a professional future in creative writing, he is excited and looking forward to continuing with his newfound love for storytelling.

“It’s better than any other writing class,” Thomas said.

Senior Emma Ash is another one of Halstead’s students, a writer with a love for sci-fi and horror-esc pieces. Preferring short stories, Ash has written 12 works this year so far, her favorite being a gruesome murder. This is her first year in the class (second with Halstead) and she loves that she has the chance to take this course, having wanted to for a long time. Ash finds the lack of structure motivating, encouraging her to awaken her creativity and energy in the mornings so she can have a productive day.

This hobby is an outlet for her and while she doesn’t intent to use it in a career-sense, it’s something she doesn’t want to quit anytime soon.

“I like that I get to express myself through characters and make-believe, it’s a part of me,” Ash said.

Senior Jack Land is also in this class, a short-story writer of close to a decade. Although he started writing at such a young age, this is his first year in Halstead’s class. He’s written “at least a hundred” stories across various platforms and genres over this time. Fiction-writer who has done it all, Land’s recent favorites have been a collaborative story made over the summer and a Frankenstein-inspired gothic piece. Land lost a lot of his stories at the end of eighth grade when his notes app malfunctioned and for a period of time, he lost all motivation to write – but Halstead’s class changed that.

The class’s freedom and personality made him find his love for writing again and while he too isn’t going into creative writing in the future (instead going into acting), he will always be a storyteller at his core.

“The stories I’m proudest of are the ones when I can feel it,” Land said.

These students and many others in Halstead’s first period creative writing class find this hour and a half a time to express themselves in fiction, songwriting, poetry, script writing and so much more. Lacking much structure has given them an opportunity to simply exist – and this class will continue to be just that for years to come.

“It’s giving them freedom to share their stories,” Halstead said.