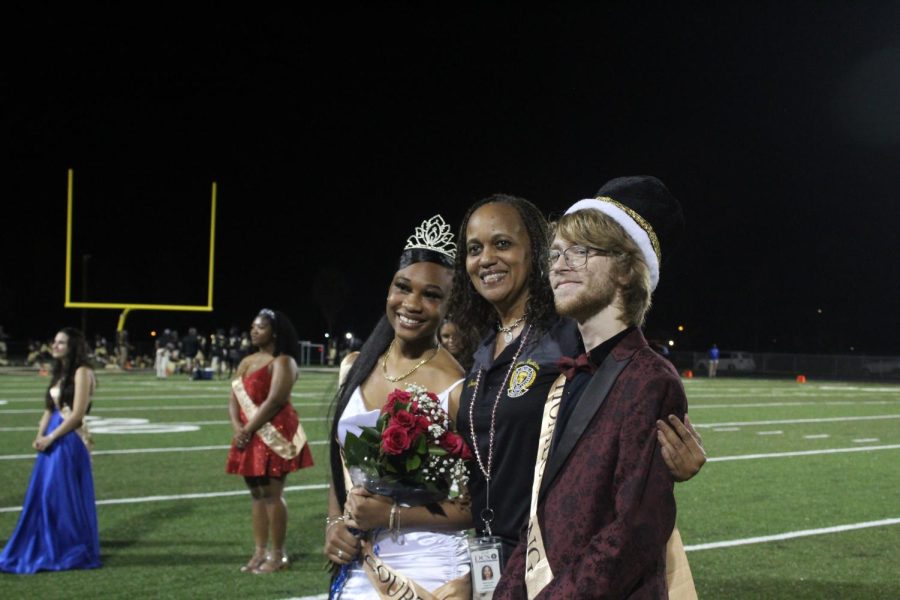 From left, Homecoming queen Torri'ell Norwood, principal Erin Savage and Homecoming king Dante Giuffre pose on the field on Oct. 8 during halftime. The king and the queen will attend the Homecoming dance.

Lakewood’s homecoming dance, which was canceled last year due to COVID-19 has returned and will be on Nov. 6 in the gym from 7-11 p.m.

The Student Government Association (SGA) is putting on the dance. They met on Oct. 12 at 2 p.m. to plan the homecoming themes, and later on Oct. 14 put out QR codes for Lakewood students to vote on their favorite theme during both lunches.

“I like it,” SGA member Whitney Whittingham said. “I think they chose a good one.”

SGA sponsor Necole Tunsil said she has already ordered a DJ and the decorations. She said tickets are on sale during lunch and they cost $25.

“The capacity of the gym is 600; we’re only selling 425 tickets, so only about half the student population will be allowed in… first come-first served,” she said.

Although the dance was originally supposed to be after the Homecoming football game at the end of Spirit Week in early October, Tunsil said the district suggested that they push the dance back in hopes that COVID-19 had waned.

“We weren’t forced to move it back. We just took the suggestion into consideration. … We will encourage those to wear masks, and will have hand sanitizer around the gym,” Tunsil said.

Other COVID precautions also have been implemented. Principal Erin Savage told Tunsil that outsiders will not be permitted.

Whittingham and others, however, said they are unhappy about the no-outsiders rule.

“We don’t want to only go with people from here. Like if you got a boyfriend or girlfriend from another school, you can’t bring them,” she said.

Junior Delaney Greeno agreed with Whittingham about the fact that Lakewood is not permitting outsiders.

“I think it’s really restricting to people who socialize outside of school…  It makes me pretty frustrated that you can’t bring other students,” Greeno said

Tunsil said she is doing all she can for Lakewood to have a smooth dance.