Injured athletes are recovering both physically and mentally

One of the four Spartans is already back on the field, while the other three are improving day by day. 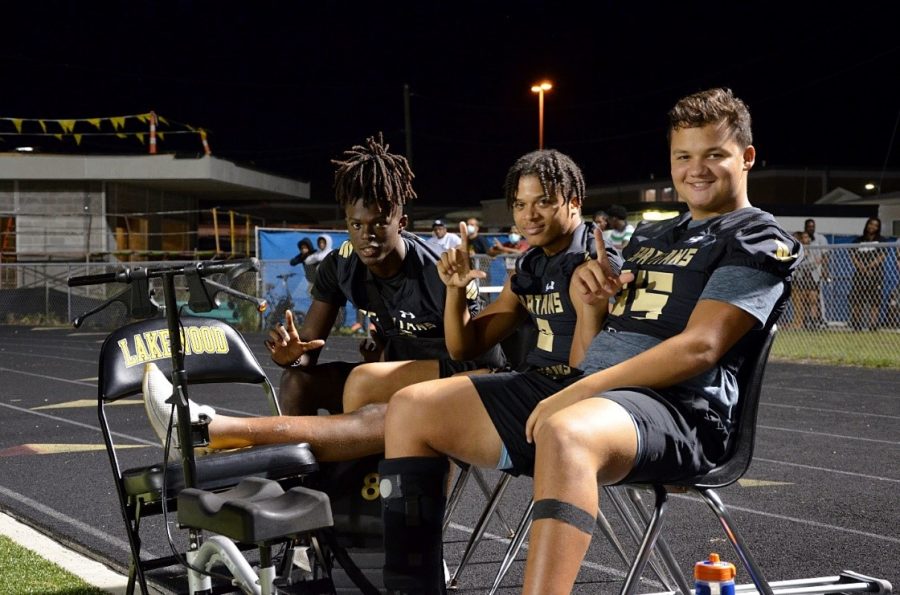 Injured Spartans, from left, Lutarus “T.J.” Adams, Ramon Davis and Nate Sosa-Jones sit on the sidelines during the game against Atlantic High School on Sept. 17.

In early September, football players Ramon Davis, Lutarus “T.J.” Adams, Emmanuel McNeil-Warren and Nate Sosa-Jones suffered varying degrees of injuries during a game against the Palmetto Tigers, but all four are recovering nicely.

“I think for the most part … the guys have been getting stronger. All of them are making great progression,” football coach Cory Moore said.

McNeil- Warren has made a full recovery and is back playing. Adams should be fully recovered in about two weeks. Davis will be up to six more weeks, and Sosa-Jones will take about two more months for a full recovery.

Davis plays safety and was injured when his teammate accidentally hit his leg. He broke his fibula and tibia in the fourth quarter six minutes before the end of the game.

“I was sad I couldn’t finish with my teammates, but I knew I had to take care of my injury first,” he said.

Davis started rehab just two weeks after surgery, and he’s worried about his dreams to play in college.

“I feel like recruits are going to look at me differently,” he said

McNeil suffered a jarring concussion. He was playing defensive back when he got injured.

“I went for a ball. I hit one of my players hard and hit the ground hard and got a concussion,” he said. “I thought I was done for football, and I thought I’d never be able to play again.”

Sosa-Jones tore all the tendons in his right ankle, dislocated his ankle and broke his fibula.

“I got injured on a punt and the snap was too high, so I went up to get it. After I got it, they were about to block it, so I ran out to my left side. They grabbed my legs, and someone hit me over the top and the person who had my legs kept them there and they twisted and broke,” Sosa-Jones said.

His recovery will take about two more months with intensive physical therapy.

“Instantly I felt sad, and I still do because the thing I love most was taken away from me in 15 seconds,” Sosa-Jones said.

Recovery for Adams, who broke his collarbone playing wide receiver, should be two more weeks of rehab.

Adams was shaken up by his injury, and he said he hopes his injury won’t affect his odds of playing in college.

“I was heartbroken on the bench,” he said.

Coach Moore said he is happy that his players are recovering well.

“I think the more of them we do get back, it gives us more weapons, which allows us to be more effective,” Moore said. “But it’s just good to have them back.”