Editorial: Nobody benefits from a second lunch

Lakewood lunches continue changing, but not for the better. 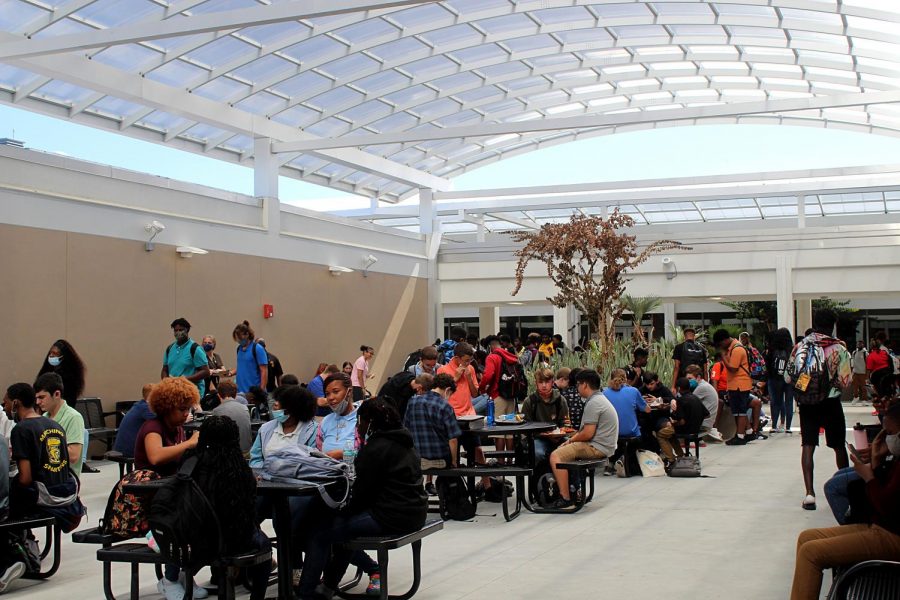 Students eat at the available tables during lunch on Aug. 19. This was four days before second lunch was implemented. "They should have started it at the beginning of the year instead of doing it weeks into school," sophomore Kayla Conde said.

As every student at Lakewood knows, our previously held single lunch schedule was replaced last month for an undoubtedly unique two-lunch system. This abrupt shift in students’ routine has abhorrent consequences on student life.

The most obvious of repercussions is the social aspect, and its importance should not be overlooked. One of the few opportunities where students are free to speak to whomever at school is at lunch. To split the students into two lunches greatly limits their ability to communicate with their peers. The elimination of this unique time in which every student has open and easy communication with each other diminishes efforts to strengthen Lakewood’s sense of community.

These changes have had a jarring effect on school extracurriculars. With students sporadically scheduled to different lunches with no regard for club obligations, previously held club meetings have been forced to reschedule to the end of the day. These new meeting times present a plethora of predicaments, especially for those who struggle finding a ride after school. The effects of lunch changes have severely limited the ability of bus riders to participate in school activities. It’s shameful that not all students are given an equal opportunity at Lakewood over something as trivial and reparable as a lunch schedule.

The best solution to overcrowding was already conceived over a year ago. Move lunch back to the end of the day. The people who want to grab lunch will do so, and those who don’t, can go home. With buses not departing until after lunch, there would be ample time for bus riders to get food and for clubs to meet. With three lunch lines, grabbing food is more efficient than even last year. While it is possible fewer students will take food from the cafeteria if lunch is at the end of the day, this is most likely because students have the freedom of choice to go anywhere else for lunch.

Lunch at the end of the day gives the best of both worlds, and principal Erin Savage said she supports the end-of-school lunch system as well. However, district leadership has said that lunch must take place strictly in the middle of the day this year.

The district decision to move lunch from the end of the day into the middle is exactly what caused the problems we’re facing such as overcrowding.

“It was thought by the Area 3 supervisor (Dywayne Hinds) that the lunches were too full, so we went from one lunch to two lunches,” Savage said.

Lakewood High School has the smallest student count of any high school in the district. If we are unable to avoid overcrowding, it’s doubtful any school is.

Our district restricted lunch times to the middle of the day, causing issues we hadn’t had previously. Rather than swapping back to a system that worked last year, we were yet again forced into another lunch schedule, this time more problematic than ever. School decisions should not be made by people who are rarely here. Savage’s knowledge and experience at this school far surpasses any superintendent. She understands the costs and benefits of lunch timing and is capable of deciding what is best for this school. The best thing for students is for our district to allow principals to make these decisions for their own schools.

-This editorial reflects the opinion of the SNN editorial board