Administrators say C-wing teachers should be back in their rooms by November or December. 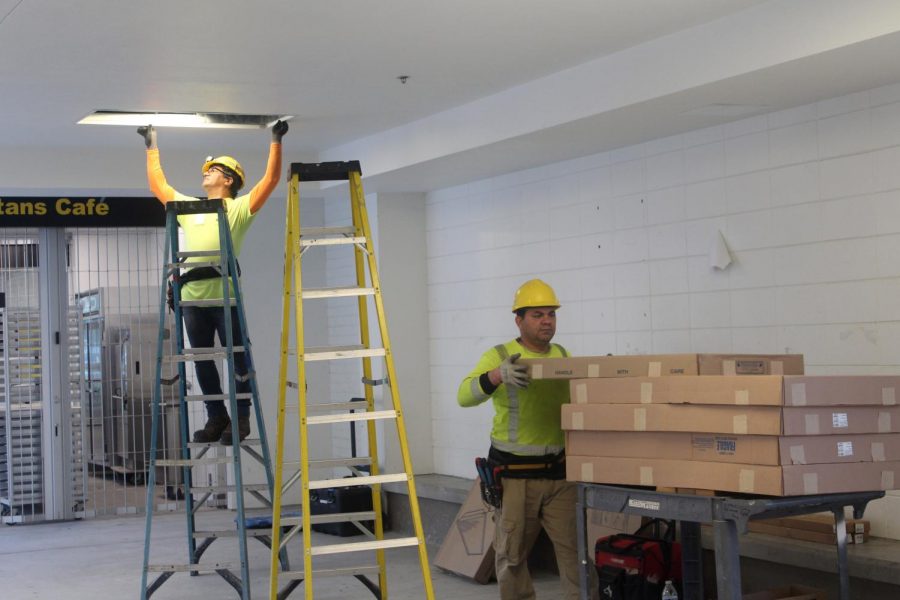 Constructions workers install new light fixtures in the ceiling near the Spartan Cafe by the Hub.

Last year construction moved C-wing teachers into the portables and scattered them throughout A and B wings. Now students and staff are left with the question: What comes next?

C-wing is getting new floors and ceilings and fresh paint. Furniture for the wing – including desks and chairs for teachers and students – has been ordered, principal Erin Savage said.

C-wing teachers should be back in their rooms by November or December. Then renovation of B-wing and the 400-wing should start.

In addition to C-wing, new tables for the cafeteria were ordered and the sound system for the auditorium along with the renovations of the auditorium bathrooms are ahead of schedule.

“August 2022 is the projected finish date (for the entire renovation), but it will probably go a little bit longer,” Savage said.

Currently, students are facing frustrations getting to some of their classes on time due to portables being far out by the football field.

Although “the distance (to the portables) is a lot farther,” sophomore Kaden Hubbard said, the renovations are not affecting teaching and learning in the classroom.

Teachers are also still adjusting to the new areas in which they teach.

“I still have boxes all over the place. There’s certain things I just can’t do in this room,” said art teacher Jayce Ganchou, who was originally in C103 and now in A207. “It sucks teaching art in a chemistry room.”

English teacher Christopher Mosher, whose classroom this year is in the portables, said it is difficult being so far away from the front office.

“I feel like I have less access to the resources,” he said. “But I like that I have access to my own AC and there’s more space in here than other classes on campus.”

Despite the inconvenience of smaller rooms, longer distances to walk, and not being in the usual space, the construction is “coming along nicely,” Savage said.

Along with construction inside school, there’s also heavy construction outside with the new turf field in the stadium along with a multi-purpose bathroom, ticket booth and concession stand.

“Bathrooms will be separated for the home and visitors so they will not have to cross over,” said athletic director Laura Mudd.

Currently, PE classes are not meeting out by the field, but tonight (9/17) is the first home football game, so the new turf will be spotlighted.

“We’re happy having a field that won’t go through the pains of the weather,” football coach Cory Moore said.

Mudd said the construction is “moving right along.”

“It seems to be on schedule with a finish date of October-November is what they have told us,” she said.