After more than a dozen years of a single lunch period, students will now eat at different times to reduce crowding. 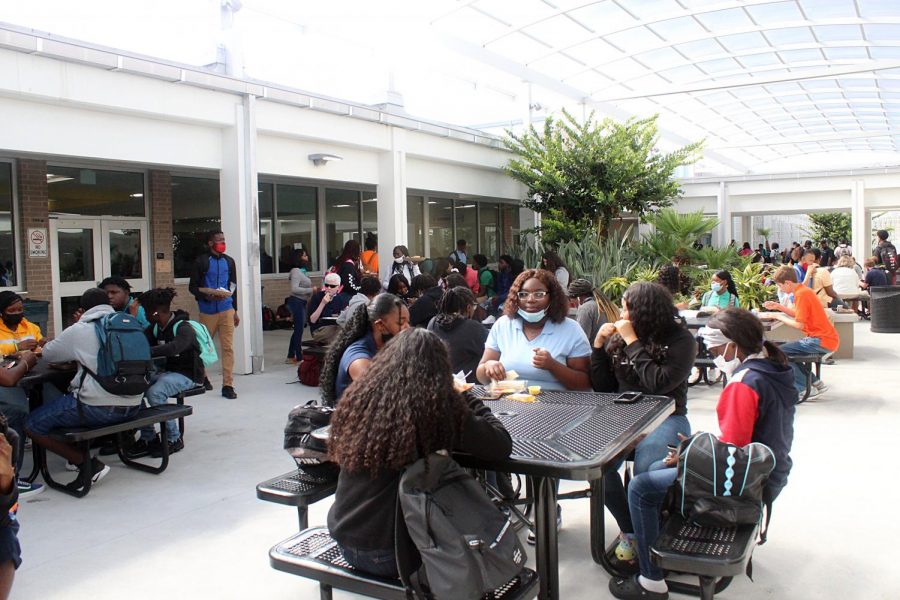 Students eat in front of the cafeteria during lunch on Aug. 19. Starting Aug. 23, Lakewood will have two lunches instead of one in an attempt to allow for social distancing. "They should have started it at the beginning of the year instead of doing it weeks into school," sophomore Kayla Conde said.

The announcement came to Lakewood Wednesday evening. After at least a dozen years of the school having a single lunch in the middle of the day, district leadership decided to make two lunch periods. District 3 superintendent Dywayne Hinds Sr. made the decision after he visited campus during Tuesday’s lunch and was surprised by the crowded environment.

“I think him seeing the sheer numbers, it was a shock,” principal Erin Savage said.

The timing of Hinds’s visit was purely coincidental, but after observing the crowded lunch in combination with the risks of COVID-19, he felt the change was necessary, Savage said.

“He felt like due to COVID, it was a safety hazard,” she said.

Savage said Hinds called her after school on Tuesday after his visit and said he had some “good news.”

“He was like, we’re going to do two lunches. I said, that’s not good news, what are you talking about?” she said.

This change impacts more than just Lakewood or the schools in district three. Any school in Pinellas that has just one lunch will have to split it, Savage said.

In the past, even when Lakewood was much bigger, students still ate at the same time. According to Savage, as many as 1,400 students had lunch simultaneously.

Many students and faculty feel that lunch at the end of the day during the 2020-2021 school year made more sense.

“I would prefer lunch at the end of the day, but I don’t think our county wants that. … If people don’t want to eat, they can go home, so that’s less people in line. … The day will feel shorter but people can still have time to be with their friends,” computer teacher Anthony Snead said.

“It’s better at the end of the day, because kids can eat and leave, so (there’s) not too much of a line and too many people eating at once,” she said.

Savage said that during her conversations with district officials and other school principals, the idea to move lunch to the end of the day was turned down.

“I asked for lunch at the end of the day … me and the other high school principals, and we were told no,” she said.

The lunch change also impacts clubs. In the past, many groups met during lunch so that all members would have the opportunity to attend, even if they rode a bus. But the new schedule makes that plan difficult because students may not be eating at the same time.

“I think it creates problems for clubs since they won’t be able to meet in person if they don’t have the same lunches,” math teacher Ruth Hester said.

Snead also expressed some of his other concerns about it being easier for kids to skip classes.

“(There could be) more opportunities for skippers who want to get into two lunches and try to mingle, (there) may be more fights,” he said.

While many have expressed concern about the change, some have looked on the bright side.

“A pro would be shorter lines, (and) more space to be yourselves. Students won’t all be cramped and shoved in like sardines,” Hester said.

“It will be easier for people to get to and from lunch and classes without being in a jam,” junior Isaiah Davis said.