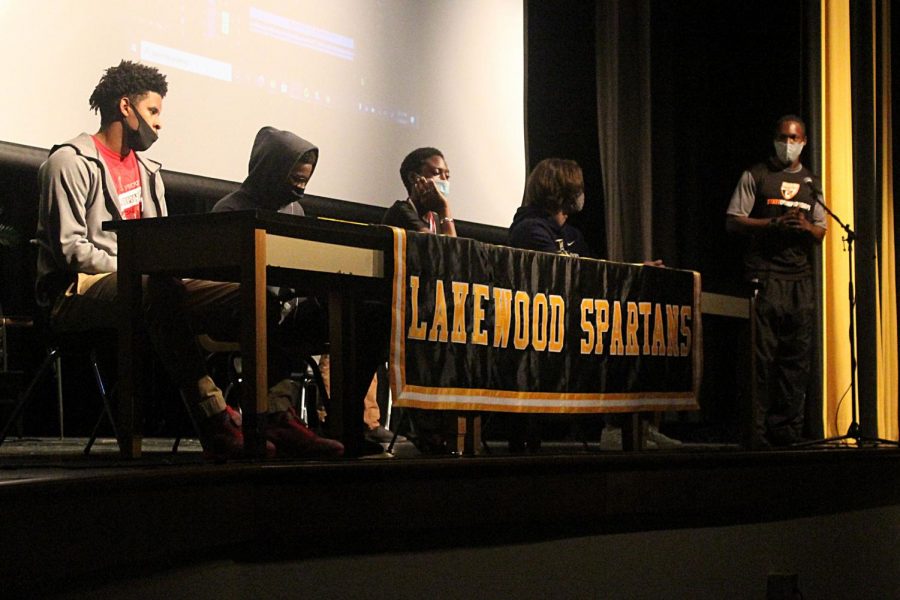 At podiumCoach Anthony Snead recognizes the efforts of seniors Oteman Delancy, Jocolbi Morgan, Cynthia Lawson and Max Bernhart at the signing ceremony on May 29. They earned scholarships for their performances in basketball and track.

Five Lakewood High School athletes signed to different colleges for multiple sports on May 28 in the school auditorium.

Track athletes Cynthia Lawson and Armani John both will be attending Allen Community College in Kansas, and fellow teammate Jocolbi Morgan – who participated in football, track and basketball – will be attending Claflin University in South Carolina next year.

“Morgan has been a three-sport athlete … and the school he’s going to is lucky to have him,” football and basketball coach Phillip Muszynski said.

“He became a guy that was a vocal leader, trying to do right,” he said.

Soccer player Max Bernhart signed to play at Lawrence University in Appleton, Wisc. He was the only soccer player on the team to sign to a college.

“Oteman was well deserved. He was a four-year starter and he holds a record (at Lakewood for most points in a game),” Muszynski said. “Barry university is getting a great player.”