History teacher Brandon Vaughan has brought the boys’ team from one of the worst in the county to district champions. 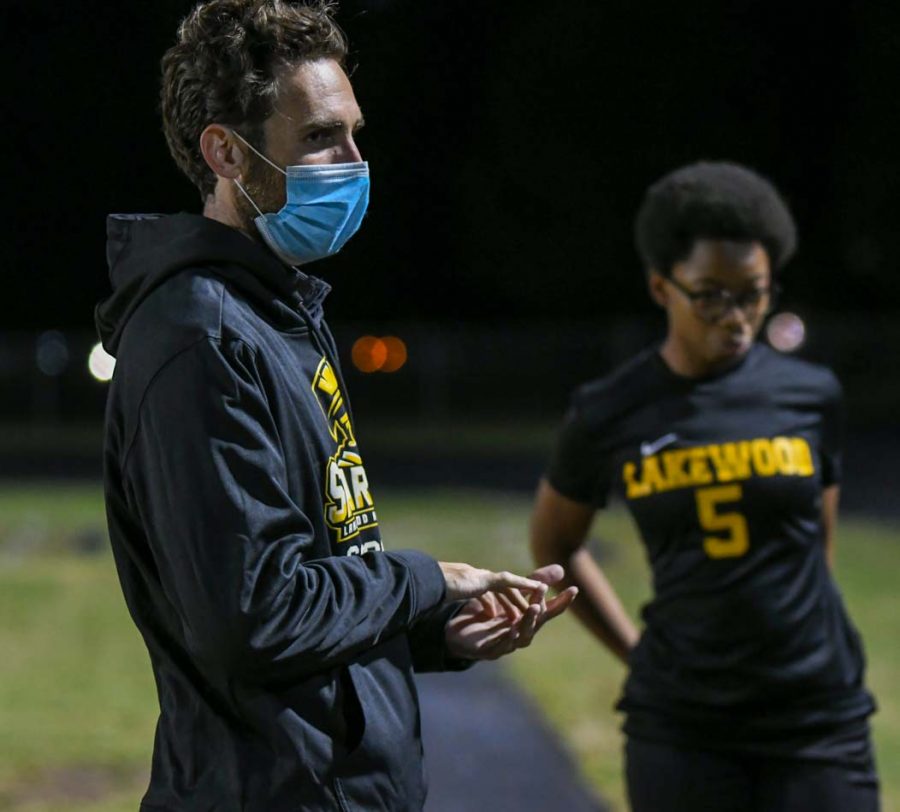 Coach Vaughan speaks to team about the game

Lakewood’s boys’ soccer team had a record-breaking year compared to past years with an overall record of 17-4. Of course, coach Brandon Vaughan played a big part in that, which is why he was named the Pinellas County Coach of the Year for boys’ soccer.

“It is always nice to receive recognition from your peers for the job that you have done, especially when at times some question whether or not you know what you are doing,” said Vaughan, a history teacher.

The award was voted on by all the county’s coaches last year, but he was presented with it around spring break by sports director Laura Mudd.

“The boy’s team was one of the few teams that made it as far as we did, for the second year in a row and the other coaches recognize that,” Mudd said.

He was given a plaque and a ring but the usual banquet that’s held each year to honor the coaches of the year in all sports was cancelled due the pandemic.

“I would like to say thank you to all of the boys’ because they are the ones that really won this award. They put their trust in me and what I was asking of them,” he said.

In just four years he’s taken the boys’ soccer team from being one of the worst to district champions and team captain Max Bernhart said he’s made a positive impact on everyone he’s coached.

“Everyone on the team is extremely close with coach. I personally see him as much as a friend as he is a coach. I think he’s really focused on team bonding these past few years with team meals and getting us to spend lots of time together which has really helped make this bond,” he said.

Bernhart also said that when he was chosen as team captain at the end of his freshman year, he was both surprised and confused but it showed just how much Vaughan believed in him.

“I am always grateful for that belief in me that they have shown, and this is the reason I see this award as something our team earned rather than just me,” Vaughan said.

Although he hasn’t been coaching soccer for long, both teams he’s worked with have made a lot of progress compared to past years.

When asked about advice he’d give to new coaches he said to, “enjoy every second, surround yourself with people you can learn from, not just in the sport you coach.”

Being honest is probably the most important piece of advice, he said.

“You want your players to trust you to the fullest, and I believe that can only be accomplished when you are honest with them,” Vaughan said. “Yes, you may have to have difficult discussions but how you show empathy also plays an equal role in the honesty that should be shown.”