Field to get fake turf

Lakewood to make switch to artificial turf on football field. 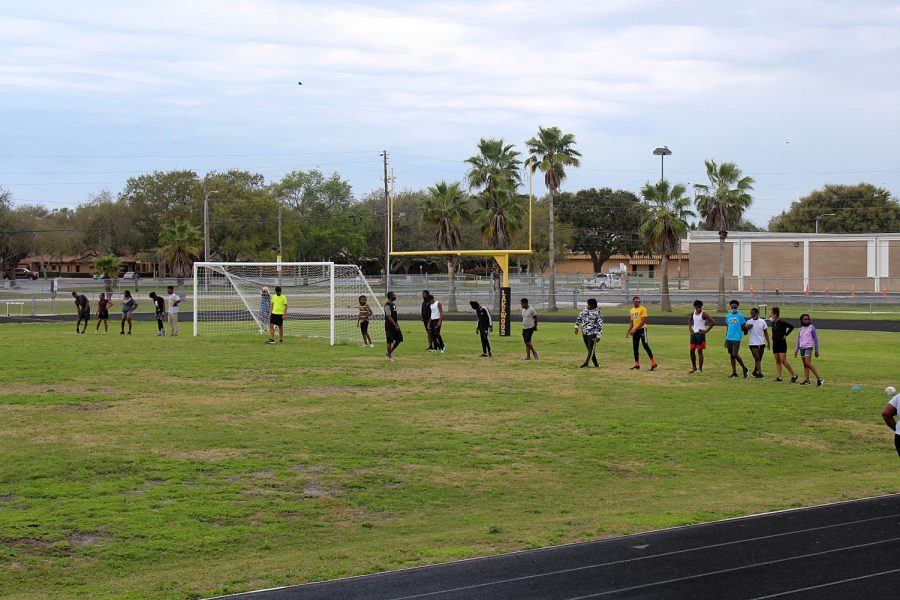 The football field here at Lakewood has been hanging on by a thread for many years with its patches, dirt holes and the paint barely being apparent. Many athletes are fed up with its poor condition, so the school is taking the next step by switching to artificial turf early February after the soccer season ends.

“We get a lot of use out of our field, especially during the years when we go to playoffs, so it has a lot of wear and tear and it’s just time,” principal Erin Savage said.

The installation should be finished in late June, early July so it will interrupt the spring football season, flag football and track and there will be no home games for those sports.

Tarpon Springs High School will also be getting a turf field in March. Currently, St. Petersburg High is the only school in Pinellas County that has one, but turf fields will soon be on all high school fields within the district.

The field is usually given time to repair by putting plugs of grass, fertilizing and having everyone stay off of it during offseason but when spring football comes around, the team goes back to practice which doesn’t give it enough time and puts it back in bad condition.

“It’s going to be really pretty, but from a health standpoint I have heard the turf can be hard on the knees,” Savage said.

Turf consists of a layer of stone or concrete, rubber and then the artificial grass and infill.

Student athletes are excited, but some are also concerned about the injuries like turf burn and “turf toe,” which is a sprain of the main joint in the big toe. Freshman Sienna Van Beynen, the goalie for the soccer team, said it’ll be painful for sliding, tackles and especially diving.

“Cuts and stuff are easy to deal with… but turf is like rubber so (the abrasion) can leak pus and it’s really gross and takes a really long time to heal over,” she said.

Junior Eleida Pena, who is also on the soccer team, said she is happy about it because she has cleats that are made specifically for turf fields.

“For me it’s easier because I feel like I have to control the ball more because it moves faster, but it also makes the game a lot faster and more fun,” Pena said.

Turf won’t just affect the look of the field and the health of athletes; it’ll change how teams play. Senior Artez Hooker said he and other players on the football team run faster on turf and that it’s worth stripping the field for, but there are still some cons.

“I don’t really like turf because the heat goes through our cleats, but I do think it’s necessary depending on if it’s raining because grass gets muddy,” he said.

Turf won’t just be better looking, it’ll be easier to maintain, too. The most the school will have to do is regular sanitation to protect the health of the players.

Once the turf in installed, the district will pay for a Spartan head graphic to be put in the middle of the field, but the school has to raise funds for the endzones, which will say “Lakewood” on one side and “Spartans” on the other and will cost about $70,000.

“My hopes are that we will raise some funds to show that we are trying, but realistically the majority of the money will probably come from the district,” Savage said.

To raise the funds Lakewood is selling advertisements that can be displayed around the field or basketball court. The cheapest option is a company or family buying a brick for $150 with their name engraved on it. The bricks will be on the home side leading to the bleachers. The most expensive option, for $2,500, would include a 10-foot-wide banner on the fence along 16th Street, a name displayed on the scoreboard for all basketball games, a brick on the path and a website advertisement.